Hyperbaric Oxygen Therapy (HBOT) has been used in numerous applications in helping patients heal faster.   Along the way, professional and amateur athletes and found that they can obtain similar restorative benefits for the repair of muscle and ligament tears and strains.

HBOT involves inhaling pure or a more concentrated amount of oxygen or at greater than one atmosphere (1 ATA) while in a pressurized chamber. This painless therapy increases the oxygen concentration in the body several  times the normal cellular level, which promotes the natural wound healing process and rejuvenates the human body.

Atlanta Spine & Sport offers Mild Hyperbaric Oxygen Therapy (mHBOT or mHBT) with a hyperbaric chamber that pressurizes to 1.3 atmospheres (30% more than what you normally experience, which is similar to the pressure of being approximately 10 feet underwater). Because mHBOT operates at a lower pressure than hospital grade hyperbaric chambers (1.5 ATA or greater), they are easier on the body to handle while providing the same benefits as higher pressurized chambers. In addition, mild hyperbaric chambers operate using oxygen concentrators rather than 100% pure oxygen, so there are virtually no risks of oxygen toxicity or other dangers of using 100% pure oxygen.

Though nothing new, Hyperbaric Oxygen has gained importance and shown benefits ranging from stroke, brain injury, wound healing, muscular skeletal repair, tissue rejuvenation, and many other conditions.  Wherever blood flow and oxygen delivery to organs, tissues and cells are reduced due to injury, swelling or  inflammation,  improved function and healing can be achieved with Hyperbaric Oxygen Therapy (HBOT) 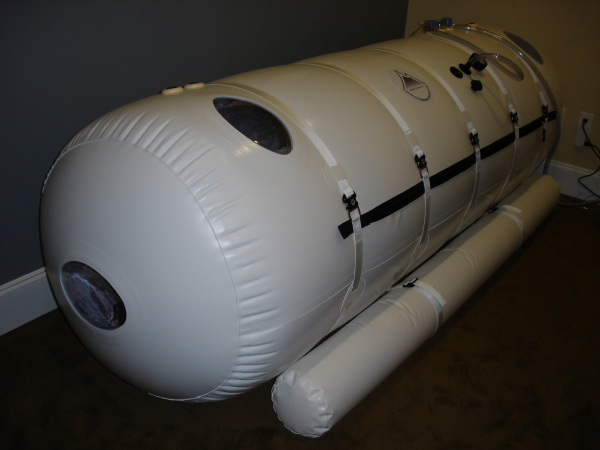 “The healing of a sports injury has its natural recovery, and follows a fairly constant pattern irrespective of the underlying cause. Three phases have been identified in this process: the inflammatory phase, the proliferative phase and the remodelling phase. Oxygen has an important role in each of these phases [Ishii et al. 2005].

In the inflammatory phase, the hypoxia-induced factor-1α, which promotes, for example, the glycolytic system, vascularization and angiogenesis, has been shown to be important. However, if the oxygen supply could be controlled without promoting blood flow, the blood vessel permeability could be controlled to reduce swelling and consequently sharp pain.

In the proliferative phase, in musculoskeletal tissues (except cartilage), the oxygen supply to the injured area is gradually raised and is essential for the synthesis of extracellular matrix components such as fibronectin and proteoglycan.

In the remodeling phase, the tissue is slowly replaced over many hours using the oxygen supply provided by the blood vessel already built into the organization of the musculoskeletal system, with the exception of the cartilage. If the damage is small, the tissue is recoverable with a nearly perfect organization but, if the extent of the damage is large, a scar (consisting mainly of collagen) may replace tissue. Consequently, depending on the injury, this collagen will become deficiently hard or loose in the case of muscle or ligament repair, respectively.

The application of HBOT

The application of HBOT for the treatment of sports injuries has recently been suggested in the scientific literature as a therapy modality: a primary or an adjunct treatment [Babul et al. 2003]. Although results have proven to be promising in terms of using HBOT as a treatment modality in sports-related injuries, these studies have been limited due to the small sample sizes, lack of blinding and randomization problems [Babul and Rhodes, 2000].

Even fewer studies referring to the use of HBOT in high level athletes can be found in the literature. Ishii and colleagues reported:
The use of HBOT as a recovery method for muscular fatigue during the Nagano Winter Olympics [Ishii et al. 2005]. In this experiment seven Olympic athletes received HBOT treatment for 30–40 minutes at 1.3 ATA with a maximum of six treatments per athlete.  It was found that all athletes benefited from the HBOT treatment presenting faster recovery rates. These results are concordant with those obtained by Fischer and colleagues and Haapaniemi and colleagues that suggested that lactic acid and ammonia were removed faster with HBO treatment leading to shorter recovery periods [Haapaniemi et al. 1995; Fischer et al. 1988].

Also in our experience at the Matosinhos Hyperbaric Unit several situations, namely fractures and ligament injuries, have proved to benefit from faster recovery times when HBOT treatments were applied to the athletes.”

(US National Library of Medicine.National Institutes of Health

Send Us a Message Request Appointment Read Our Reviews